After thirteen years without a kitchen curtain, I finally spent some time yesterday sewing one. Tadaah!

Before – Looking very sad and empty 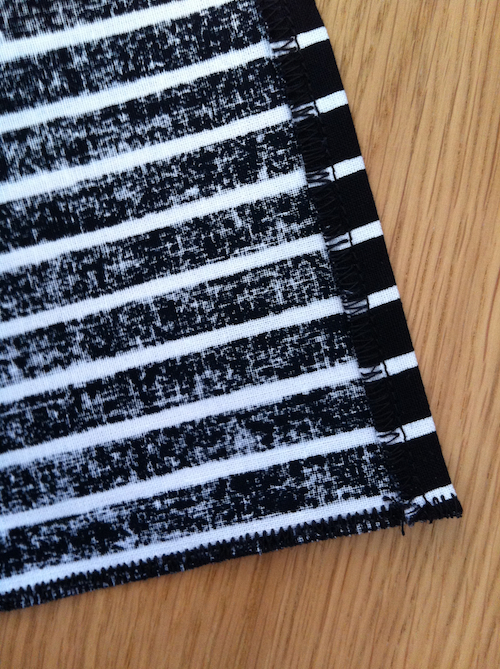 After – Very much better

The space isn’t lending itself to tall, flowy floor-to-ceiling curtains, because the door to the balcony is to the left and the fridge/freezer is to the right. The dark wooden rectangle in the window frame is a slim airing window.

The curtain ended up being 39 cm tall (about 15 1/3”) and something around 195-200 cm wide (76”-79” range). I used one of those ribbons with built-in strings (with which you can create ruffles) to which I attached the plastic hooks that in turn were slid into the gliding thingies of the curtain rod. In Swedish they are called “ryttare”, rider or horseman, when you’re talking about the stuff connecting a sail to a mast; similar types of contraptions are what glide back and forth in my curtain rod, too.

The fabric is Paasi designed by Pentti Rinta for Marimekko in 1976 and it was made by printing black stripes on white fabric.

I’ve also managed to sew a cover for a tower of baskets containing miscellaneous linens and some cleaning gear to keep the dust at bay. I used a flat sheet from Ikea, which was the perfect width to cover the structure on three sides, so all I had to do was cut it to length. The raw edge was finished and I sewed 14 strings of ribbon around all perimeters to tie them around the corner legs.

Yesterday I’ve put a new fabric on the headboard of my bed. Originally, it was covered in a beige fabric with brown leaves and rusty orange berries, but the colour scheme doesn’t fit in my home, so I picked a white fabric purchased several years ago, which now suits the white, minimalist bedskirt (flat like the kitchen curtain) very well. The badly-fraying fabric is most likely Lenda by Ikea, so once I had cut a piece of suitable size, I used the same stitch as on the curtain to secure the edges. Thanks to my vast experience on using a staple gun (yay, pressing board!) I knew exactly what to do next and the rest is history.

A couple of days ago I started on a dust cover for my Canon Pixma, but it’s on the ice right now. I needed to see quick progress, but there was so much math and round corners involved that I decided to take a break to avoid getting angry at the project.

Any time I open a particular door my eyes see a hot mess of yarn projects, so I tackled the perfect storage for them last night, but consider this a teaser; more later during the weekend! I waited thirteen years for a kitchen curtain, so a few hours is nothing, hehe.

Hi, I'm Nina from Helsinki, Finland. Welcome to my blog! I'm a bit of a fabric freak and quilting is what I'm working on learning mostly, but there's some general sewing and knitting going on, too. I'm also a novice pattern designer, with projects happening "behind the seams" for NM Patterns in both quilting and embroidery. The blog itself is a work in progress, whilst I'm tweaking things to make your experience as nice and easy as possible. If you comment on posts, please expect a reply there :) Hope you enjoy your visit!

...I would love to learn new things in a focussed way. While it may sound a bit boring to have a checklist, it still gives a lot of freedom within a rather loose framework.
Instead of specific projects, I'm thinking the following techniques would be nice to try at least once:
1. Appliqué - Raw-edge Done 17.9.2015
2. Piping
3. Curves - Done 20.7.2015
4. Full circles, as per Craftsy class
5. Quilt as you go
6. English paper piecing
7. Zipper neatly in place - Done 23.7.2015
8. Free-motion quilting
9. Quilting by hand - Done
10. Snap thingies
11. Spiral quilting

Please link back to a particular blog article, if you take images and other original content from this blog to post elsewhere in non-commercial projects. On Pinterest, please pin the main image only of a blog post. Do not pin the blog header or buttons, and please link properly to individual blog posts. Thank you for understanding.